Nick Knight
"I am what I am, and I don't think Betty Ford takes vampires"

Ride along with Nick Knight as he tries to save his soul and become mortal again as a vampire police officer in the dangerous city. After hundreds of years of killing and debauchery Nick is trying to clean up the streets and his soul.

With a string of unsolved murders and the body count rising, Knight thinks that it may be an old friend of his come to extract revenge, but with the media running the story that vampires are the ones causing the ruckus, he has to be especially careful.

Been Here, Seen This.

I saw the series long before I knew there was a movie; I admit that much. So my view of the movie might be a hair tainted by the altered cast and the mentality alterations between the two variations. 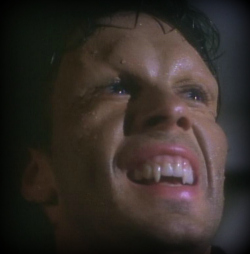 While there are some good efforts in the cast it ultimately is fruitless. I loved the series that got started because of this film; Forever Knight was a staple show in my TV lineup. Rick Springfield’s performance of officer Knight is absolutely sub-par, and while Michael Nader tries very hard to play LaCroix, it simply does not stick in the way that Nigel Bennett was able to pull off in the TV series. John Kapelos who plays Detective Don Schanke (Pronounced "Skanky" through the show) also has a completely different look and feel about him than in the series that came after.

The budget was laughably low leading to some fairly cheesy effects. I think most of the budget was spent on procuring Nick's signature car, A 1959 Caddie. The bad effects and the acting that was equally bad by all involved seriously detract from what should have been a great movie. 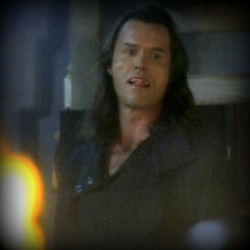 The actors that made it to the TV series had not yet found solid footing with the characters they portrayed. The low budget, and dated ....everything make it very hard to get into, at least it did for me. Especially given that while watching it I could not help but keep thinking to the TV series version of this movie, which was far better.

If you are a Forever Knight fan and you want to see what started it all, it’s not too painful to watch; but if you are hoping for something special in Nick Knight that you don’t see in the TV show, then you will be sadly disappointed given its exactly the same as the shows first two episodes.

It’s a sad reality that some franchises get the movie right and the TV show wrong, or the show right and the movie wrong; very rarely do both come out good. Buffy the Vampire Slayer and this are both tragic reminders that sometimes the movie can suck, and yet create some of the best TV shows that the generation has seen.