If you are looking for the spoilers, scroll past the picture below and enjoy! 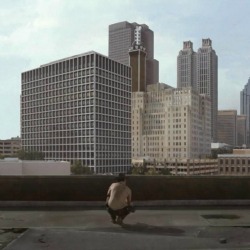 After the group finds a graveyard of cars on the highway stocked with supplies, the group decides to stop long enough to stock up. During this time a 'pack' or 'herd' of walkers appears forcing them all into hiding. 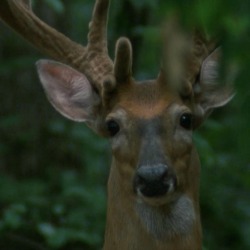 During the hiding T-dog gets sliced A good by some sheet metal and causes him to bleed out something fierce, once the herd is thought to have passed Sophia comes out of hiding, and is spotted, forcing her to haul her tiny little ass into the woods as fast as she can, with Rick right on her tail trying to protect her.

After leaving her in a safe spot and telling her not to move, Rick makes sure the path back is safe, only to return and find Sophie missing. 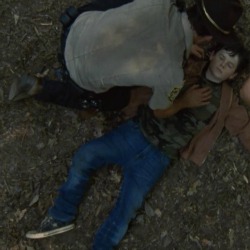 Now, with Sophie missing and T-dog seriously injured the group must make camp in the open. Daily search parties for Sophie turn up very few clues.

Shane tries aggressively to get Rick to move on, but Rick convinces the group for a few more days, then during one of the outings to find Sophie, Rick and his son stop to admire a deer walking in the woods, only to have Carl take a bullet to the stomach when a hunter, another survivor, shoots the deer dead.

And Thats Just The First Episode!

T-Dog’s injuries are getting worse, when word gets back to camp to come to the farm house where Hershel can treat T-Dog and Carl. Shane arrives with the supplies and the horrible news that he returns alone, but his partner died a hero. Shane tells a story that Rick doubts, and Daryl sees right through.

The farm is almost untouched by walkers, save for one in the well and the occasional straggler that wanders out that way. The search for Sophie continues while Carl and T-dog are on the mend, with T-dog not too far behind them in joining up.

To make matters worse, Lori finds she is pregnant and when Shane finds out he is damn determined to become part of her life again, and it only makes him more on edge when he is rebuked repeatedly through the next episodes, his rage coming out in all the wrong ways as only Shane can do.

During a search for Sophia, Daryl takes a spill down a cliff and the only person to help him is none other than his brother Merl! Well, a vision of Merl that Daryl tells to piss off and while Daryl fights to get himself back to safety and nearly gets shot by Andrea in the process. 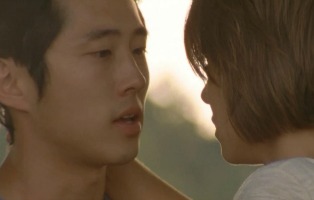 Glenn starts to fall hard for Hershel's daughter Maggie and the two love birds make plans to meet up, Glenn in a love note to her makes note that they should meet up in the loft of the barn, before she can say no they are interrupted, and that night Glenn heads up, only to find that the barn is full of walkers!

Hershel thinks a cure can be found, and while he debates if he is going to send the group packing or allow them to stay on his land, the group is told very clearly to stay away from the barn. Shane and Dale go rounds a second time and Shane makes some none too vague threats on Dales life should he ever decide to turn on him, or try to interfere with his plans to win back Lori.

When Rick hears that Shane is going overboard he confronts him, only to have Shane bust open the doors to the Barn, and force the entire group to unload as swarms of walkers come out. 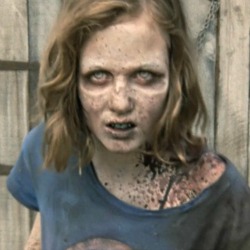 While the Hershel camp watches in horror as family, friends, and neighbors are gunned down, as the smoke clears and all start to relax, the sounds of one more walker can be heard within.

Slowly, out comes little Sophie, a walker, turned, bitten, and now one of them. No one, not even Shane has the gall to do what need be done, until Rick steps in to do what needs doing. Tensions are high, and everyone nerves are on end. Hershel has gone into the local bar where he tries to drink his troubles away.

While Glenn and Rick work on smoothing things over with him, the others go to work cleaning up the mess. Rick, Glenn and Hershel get attacked in the bar by looters, and after an intense night of firefighting, end up having to save one and bring it back to camp as prisoner.

Lori confesses her fear to Rick about Shane's growing rage, and everything that has gone on between them, this is only compounded when they go to release the prisoner outside of town, and the two come to blows, all out brawl.

On the way home, Rick makes it clear that things go his way or Shane can leave. Carl has come into his own, learning to shoot he decides to take a shot at a Walker who breaks its leg free and comes after him, the boy, scared for his life runs all the way back to camp.

As we near the end of The Walking Dead Season 2; tensions continue to mount when they cannot lose enough humanity to kill the prisoner, and that night while at camp, Dale is walking to blow off some steam and is attacked by the very walker that young Carl set free to practice killing, after being bitten, Rick puts Dale down.

Shane's rage continues to boil and he finally hatches a plan. He takes the prisoner out and kills him, only to claim that the boy escaped, and got the jump on him, the group fans out to find him and stop the problem from escalating.

Rick and Shane pair up and walks deep into the woods, and once they are alone Shane pulls on Rick, while Rick is able to talk Shane down enough to stab his best friend in the heart, the worse is yet to come. 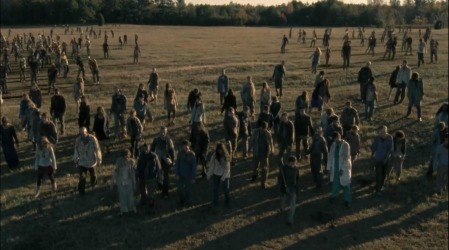 All the noise has brought the largest herd of walkers the group has ever seen.

The entire farm is destroyed, and in the battle Jimmy and Patricia are lost, along with the RV, and Andrea is left behind, nearly dead she is rescues by a Mysterious woman leading two walkers on chains.

The end of the episode, and The Walking Dead Season 2, leaves us with Rick telling them what it was Dr. Jenner whispered at the CDC that they are all infected, they do not need to be scratched or bitten, they only need to die in order to rise as a walker. 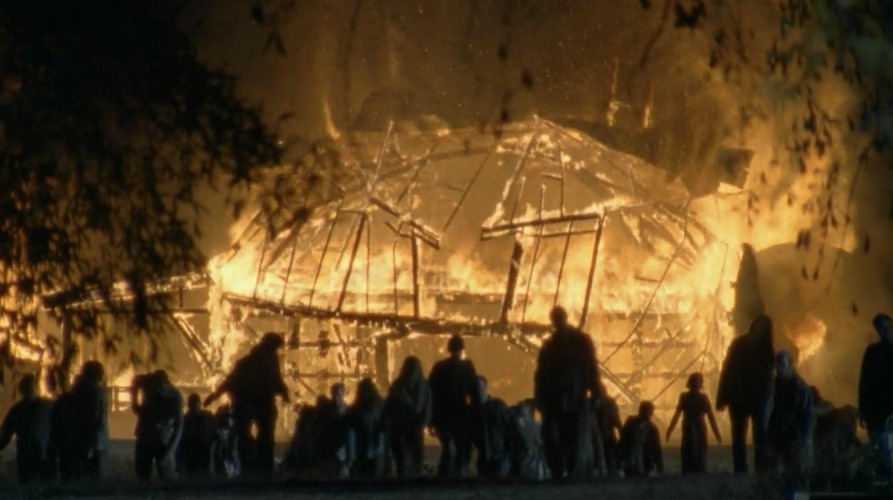 Who Survived In The Walking Dead Season 2:

Who Died In The Walking Dead Season 2:

How do You Feel About The Walking Dead Season 2? Let Us Know!