Diary of the Dead
Or: "Romero's Fall" 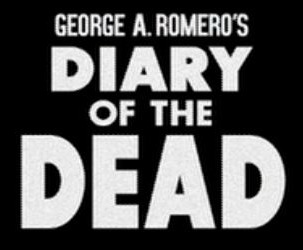 In Diary of the Dead, a group of Pittsburgh college students are attempting to film a horror movie for a class project when a zombie outbreak hits and society starts to unravel around them. Choosing to split up two of the friends head to a nearby home and the others take the Winnebago to check on their family. 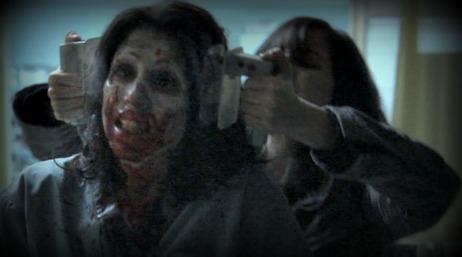 Things go downhill when they realize that nothing is normal anymore, with the world thrown into chaos, the only thing they can believe is what they see with their own eyes. Jason has an obsession with filming the events around him so that he may pursue his dream of being a documentary journalist, and at times his obsession poses great risk to his friends.

The Worst of an Iconic Series

The majority of Diary of the Dead is filmed in the aspect that 'you' are the camera man, in most cases Jason Creed. The shots that are not 'taken by Jason' are taken by who ever has the second camera at the time.

For one hour and thirty five minutes the story shambles forward, with a cast of cut out horror film cliché. Everyone seems fairly blah about the whole thing except for a couple scenes where it seems that they may have had some emotion written in after all. It’s too bad that one of the better actors and portrayers of emotion dies early in the movie.

I want to say that this was 'intentional' to poke at amateur movie producers and camera men that are all over the internet, but I doubt it. Romero, as much as I like his movies, seems to have not put as much work into Diary of the Dead as he did with his other films.

The special effects are about average for the time, and thus a little bit dated now, clear green screen lines can be seen in a couple scenes, and the overall atmosphere is very quickly thrown together.

While the attempt to make it seem like a 'documentary' film, it's said in the beginning that she (The Director and Narrator) quote:

"Added music" and "Wants to scare you"  Compare this to something like Columbine or 9/11 and you can see how truly tasteless such a thing really is. Given this was made after 9/11, it is a poke into the eye to those that have any kind of background in media and is completely tasteless. 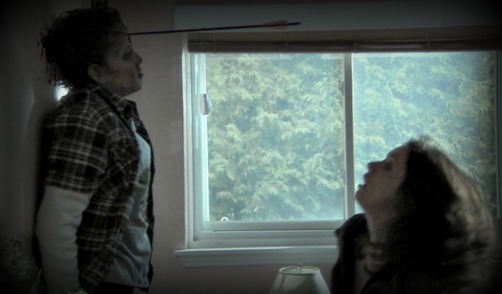 On top of that, there is no Director in the world, hard core enough to show her brother getting pinned to a wall by an arrow. (Amazing shot though, that he hit the stud in the wall and didn't go clean through the dry wall.)

Diary of the Dead truly makes me doubt Romero's integrity with this film; he panders to the 'checklist' of teen horror movies.

In no particular order:

There is also almost zero action in this movie. By far two of the best people were side characters who had only a handful of lines before you never saw them again.

Still, Romero signed his name to this tripe and he will have to live with the result not me.

Vampires and Zombies › Zombie Movies › Diary of the Dead