Mutant Vampire Zombies from the 'Hood was released in 2008, let’s start by saying the movie starts by taking place a week from next Thursday in California. While the first five minutes is absolutely boring, consisting of nothing more than 'travel shots' taken by sticking a camera out a car window while the intro credits roll, and the opening banter between two cops is little more than the worst slang you have ever seen thrown around, probably an attempt to give some credit to the 'from the hood' part.

How The Zombie Infestation Starts

At any rate, our movie finds a unlikely group of 'friends' forced into a situation when an exchange goes bad that puts two cops, and eight members of rival gangs (Four from a Asian Gang (Dragon), and Four from a African American Gang (G-Dog)) into a lead lined warehouse when a solar flare erupts from the sun sending a pulse of radiation over the entire world. But our friends here, are in Compton, thus, the 'hood'. This creates the basis for our zombie infestation. Oh, I'm sorry, this is what creates out Mutant Vampire Zombies, they are more bad ass than a regular Zombie. 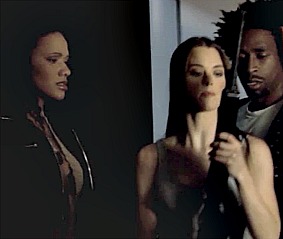 The movie itself, when looked at as a whole was not the worst movie I have ever seen. That award so far goes to "Death Factory" But the special effects budget was clearly spent on the zombie makeup and not anything else. It has some of the most 'basic' flaws of any movie made by a young, or independent film, such as clips for pistols hold approximately 'enough' bullets for a fire fight to last as long as need be, sometimes to the tune of 30+ shots in a standard Glock 9.mm to double barrel shotguns holding 12 or more, but of course when dramatically appropriate they will run out of ammunition. See the pretty girl with the gun there? She is also a doctor, pilot, and expert marksman.

The humor in the movie is fair, and the take on zombies here is that they are in fact a step in evolution due to the radiation that has come to the earth; they will grow bigger, faster, and stronger. Some with human intelligence, some can speak, others can run. Oh, and they all have a rather ravenous sex drive. With three various degrees of 'zombie rape' in the movie, and random nudity shots sprinkled within, it has all the makings of any low budget horror movie.

The progression was well done, there was never a part I caught myself thinking 'this scene is too long' and only a few times did I think that a scene was there simply for filler. For what it was it was not a 'horrible' movie, but it was not a 'great' movie. Then again horror comedy rarely is. "Shaun of the Dead" Being an example of a good horror comedy.

So if you take that into account it scores some points for spending its budget in mostly the right places.

I can overlook bad radiation sky if it means I get better looking zombies and some nudity. I mean, everyone likes nudity right?