When Everything You Love is Taken
Exit Humanity

In Exit Humanity, we follow our hero Edward Young as he pens a journal about his life after a zombie infestation starts at the end of the civil war. How he came home, what he found there, the journey he traveled among the undead and wilderness all in a search to end the madness that the world has become for him.

In his travels he finds a couple friends, and a new enemy the twisted General Williams played by the talented Bill Moseley (Repo! The Genetic Opera, Halloween) and Narration by Brian Cox (Brave heart, The Ring). Exit Humanity has a story that will keep you interested until the end.

Zombie Movie, or Drama with Zombies?

Exit Humanity is less of a zombie movie than it is a Drama that contains zombies. The lead character, Edward Young played by the talented and new to the scene Mark Gibson puts on an amazing performance, with a believable emotional response to the various things going on around him.

This movie came to my attention while I was watching a different movie (the horrible, disgustingly, unforgivably bad Kiss of the Vampire) when a friend recommended it. I put watching it off for a while because as a general rule I am not a fan of 'history' type drama movies, those being things set in a part of an alternative American history, and when I was told that it was a 'civil war zombie movie' I could not help but shudder.

Thankfully it is not a 'civil war zombie movie' it is a 'drama that contains zombies, right at the end of the civil war era' and while it does not sound like a difference, it’s massive. At first I expected dead war veterans marching across enemy lines; but once I turned it on and saw nothing of the sort I was happy, elated even when I saw the plot was good!

My favorite twist they put in this movie was the swapping on rare occasion (Normally when speaking in the past tense) to an interesting, almost cartoonish art style to depict the going on of the 'flash back' or 'recent memory'. As well as the continuity that exists in even the smallest of ways, reactions and treatment of objects that are dear, things like that. Sadly, it is all too often directors over look such tiny things. 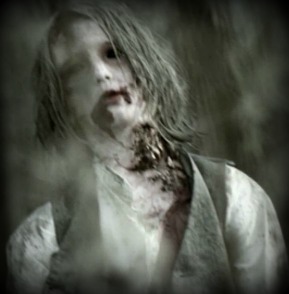 At no time during the 114 minutes that I was watching, did I ever want it to be over quicker. In fact, I got mad when my mom called to chat, I am such a bad son (Love you mom!). The story progressed steadily unlike in Autumn where it felt like the plot was dragging its feet the whole way, while continuing in a nice steady pace from start to finish.

If you want a mindless gore fest with a dash of plot, lots of screaming, tearing bodies apart, swarms of zombies and of course zombie babies go watch Day of the Dead, for a good romantic zombie comedy watch A Little Bit Zombie. But if your need is for a Zombie drama, with an intriguing plot, and nice smooth development Exit Humanity is the one you want.

As a must have for drama movie, and zombie movie lovers you can Buy Exit Humanity on DvD