R.I.P
Kiss of the Vampire

The Illuminati, led by Victor Price is doing research on immortality. For some god forsaken unknown reason the illuminati have been harvesting 'parts' from people all over the world at random.

You come to find out that they only want the secret to eternal life, so when Alex Gets shot, six times at point blank range in front of his love interest that apparently, (About 20 minutes into the movie and 2 meetings later) sees nothing wrong with this. When he gets up un-phased and says 'I am not hurt'.

They get the half cocked idea to  turn the illuminati into vampires, so that they will be 'kept in darkness' all the time. Within three meetings of this woman Alex decides to blow hundreds of years of planning and cover to tell her that he is a vampire.

Estel is not at all shocked, she just kind of smiles through it all.

Good. Because it is. I wrote it just the way it plays out in the movie.

Come on, how bad could it really be?

Now that I have given you an overview of the amazingly convoluted four plots in one that Kiss of the Vampire tries to use. Let us get into the making of the film.

There are several scenes in which you see people holding guns, aiming at people, hear the sounds of gun fire, and absolutely nothing else. No muzzle flashes, nothing hitting or missing.

Everyone that DOES get shot gets shot in the shoulder and falls in the exact same way. The combat scenes are by far the worst scenes in the movie.

If you combine all of these things:

You have only a fraction of the issues with this movie.

Alex, the head douche bag, I mean... vampire has all the acting ability of a wet paper bag. That may just be the character he was portraying, but it was just bad. A lot of the dialog is simply horrific, like it was written like some online vampire fan fiction.

Maybe thats what this was! Kiss of the Vampire is actually the project of some brain dead 14 year old who wanted to make a college project. That gives merit to the complete stupidity of the vampires!

Want a example of the stellar brain capacity that these vampires have?

I will give an example, using torches to walk through the house, into a modern day mausoleum. That contains faux wooden coffins that look like they are made of the same stuff that Wal-Mart makes its desks out of.

The leader and torch bearer of the group? A midget of course! Why? Because they are throwing anything at the wall to make some thing work in this movie!

These are also not your 'typical' vampires; a wooden stake just about anywhere in the chest area seems to kill them. As well as fake bright light as well as sunlight seems to make them melt, not catch fire.

This movie is simply awful. It contains everything that can make a movie wretched all rolled into one: Bad writing, bad production, bad voice overs, bad acting, bad everything.

The acting in grade school plays are better, at least THEY are not reading from a cue card, and the soundtrack especially the last song is like a railroad spike through your skull.

A note to the directors and everyone in charge of this garbage. I love creativity, trying to blaze your own path. It is truly sad that so very few are talented enough to make something different out of something that is so engrained in culture.

Rice, Meyer, Stoker, These are trail blazers who will be remembered for a very long time. Unless you have that kind of heart, fortitude and ability. Stick to 'the formula' and don’t try to be what you’re not. You only embarrass yourself and create something like "Kiss of the Vampire".

Good thing it was Direct to DVD, if you have a fear of vampires own this crap movie, watch it once or twice and be cured!

Though if you really want to own Kiss of the Vampire, you can buy it here. 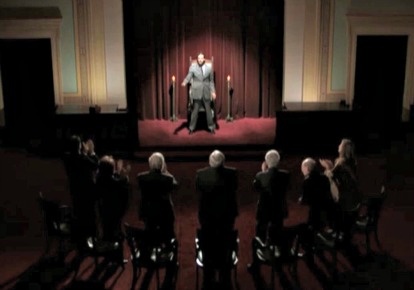 In case you ever wondered what the Illuminati looked like.

Vampires and Zombies › Vampire Movies › Kiss of the Vampire