I should have been warned when I went to hit play on the Killer Barbys Vs Dracula DVD and noticed that the 'start' was actually: "Start Sucking".

It was not to disappoint in the sucking catagory. It was like being water boarded, I could not breathe, I could not sit still I screamed in agony!

Ok, maybe not that bad, but still, I could not finish the movie. 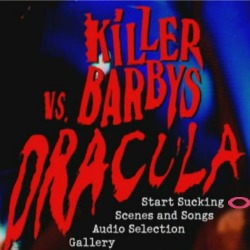 This horribly dubbed, horribly written, badly acted piece of tripe was painful to sit through.

The bar that people perform at is apparently equipped with trapeze and all the trimmings as it’s a daily variety show from bad dancing and singing, acrobatics.

Apparently, Dracula drinks beer in the sunlight, as well as having the mummy of the real Dracula just carted around to prove 'wanna be' wrong all the time. I admit it. I could not watch this whole movie. I made it about 1/3 of the way through.

The following reasons are why I could not continue:

It was painful to watch. So, I apologies if this review will be short or a bit flat. But I only know the first 30 minutes of the movie.

I simply cannot recommend this movie. The special effects are something I would see from a 1960's movie, and this was made in 2002. The acting is below disgusting.

Whatever bar they are playing in through the whole film, apparently has everything a Vegas casino has under one roof in a small fifty by fifty room. They have everything from dancing to trapeze acts within it!

But, I give Killer Barbys Vs Dracula some points for not getting the shit sued out of them by going Barby instead of Killer Barbies Vs Dracula, but a movie with killer small plastic dolls would have been more entertaining.

To be fair, if you Buy Killer Barbys vs Dracula

use it as a gift for someone you absolutely hate that loves vampire movies. They will never forgive you.

So, for you people who have watched the movie; I leave the floor open. How did you make it through this crap and what did you think of it?