Once Bitten
"You Gave It Up To A Butler, Chauffeur, And A Slut That Eats Buttons!" 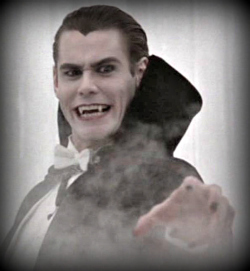 A rather amusing vampire comedy; once Bitten takes an interesting spin on vampires, and female vampires in particular. A lady vampire needs to feed of the blood of a virgin three times, every year before Halloween, and in turn turning the virgin male into a vampire himself.

Taking place in California in the 1980's its safe to say that anyone over the age of 13 would not be a virgin, given the fact that "The Countess" has employed several dim-wits to find the virgins for her, it goes without saying that time is running thin, and poor Mark is the target.

Does This Vampire Comedy Bite?

With comedy ranging from the subtle to the slapstick and everything in-between, this movie is sure to make everyone laugh at least a couple times, and while I can't say in honesty that it is the best comedy horror I have ever seen, it has a few good moments for all movie watchers.

Rather Sultry 'dance off' to the song 'hands off' between 'The Countess' and Mark's girlfriend Robin. It was a rather enchanting thing to watch to for a movie of the mid 80's, I would dare say it was on the same level as dirty dancing in how absolutely wonderful the dance scene was.

Some of the lingo is a bit dated, as well as the closed minded views towards homosexuality, but besides that the movie has aged pretty well. Not too much of the crazy 80's hair, or over use of out dated lingo. There are of course the cars them-self, and some REALLY bad special effects in the dream sequences; but those I believe were intentionally put for humor.

Production value is there for the time, on par with most 80's movies without being woefully under-par for current movies. But the fact remains that as time goes on movies become more out of date, and unlike something like The Lost Boys which aged amazingly over the last 25 plus years; once bitten has aged a little bit worse with some of the effects now being a little cheesy. 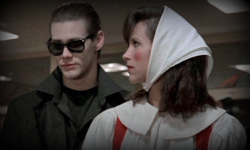 The PG-13 rating also makes it save for your young vampire lovers in the house to watch. To be honest the only things that would be questionable for even younger viewers would be a couple scenes with cars rocking, and a butt shot or two, as well as "Faggots in the shower" being repeated a few dozen times as everyone runs away....ah 80's bigotry.

The plot holes are big enough for a semi, with poorly explained variations of vampire lore, as well as the apparent inability to compromise when faced with the fact your survival is in peril it seems set up to fail. For example, if I needed the blood of virgins three times a year and I had only 10 days left to find 3?

You bet your bottom that the local orphanage would be short a couple plates at the dinner table.

The only other weak point of the movie has to be the weak is the cast, while they did not do the world’s worst jobs at acting the part out, the only talent in the movie was Lauren Hutton (The rather sexy Countess) and the talented late Cleavon Little (The greatest homosexual butler ever! Even better in Blazing Saddles). But it is clear why most never had a 'real career' in movies.

This is one of the first roles Jim Carrey got in movies, and even he fell a little flat in this role, but he was still pretty new to the big screen at that point. Sadly even the talents of those three could not carry the miserable acting of the others, and it only lowers their otherwise amazing performances.

Was It Good For You?