Let me in, follows a young boy named Owen when he makes friends with the new next-door neighbor; a young girl named Abby. Owen is a young boy; always picked on and never taken seriously going through a divorce, and Abby is around the same age 'more or less' and also has only her dad.

Things start to look up when Owen gains the courage to stand up against the school bullies, but slowly he starts to suspect that his new best friend Abby have a darker past than she lets on.

Let Me In, is a near shot for shot remake of the Swedish film made only two years earlier named "Let the Right One In". The only things that get changed up some are the names, almost everything else is identical.

Anyway, Let Me In is a horror and love story in that young Owen slowly falls for Abby who has a dark secret that she needs blood to live. All of this takes place in the mid-eighties and with some of the most socially inept teachers and parents when it comes to bullying that have ever existed. Then again, it was the 80's when this movie takes place. 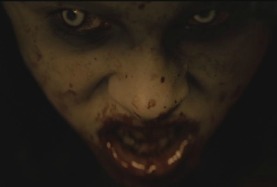 With a hand full of talent in this film it’s hard to spot one that steals the show, as both Chloe Grace Moretz (Abby) and Kodi Smit-McPhee both did an amazing job, with both emotion, reaction, and genuine on the edge of your seat performances, I more than once caught myself leaning closer to the screen.

As I can't decide who gets it, I have to split the 'award' of best actor in the film between them. With 'please hurry up and get off camera' going to the normally under rated Elias Koteas.

He just did nothing for me as the police officer.

Given that this was a Hammer production house film, and they are the same people who brought me the most painful to watch movie 'Vampire Circus' I was pleasantly surprised. Though, I only give them partial marks because this idea is not their own, it’s a remake.

I implore you to Pick Up "Let Me In" On DvD

or if you prefer on Blu-Ray 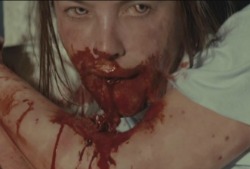 Vampires and Zombies › Vampire Movies › Let Me In