The Return of the Living Dead
"Braaaaaaaaaains" 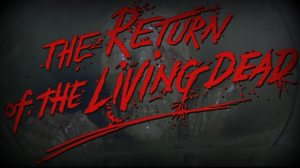 In Return of the Living Dead the undead are ready to party in a horror comedy of epic proportions. When two halfwit employees of the local medical warehouse decide to horse around with a miss-shipped government load of highly toxic gas complete with its own corpses, a cadaver is brought to life.

As if this was not bad enough, movie magic does not work on them! So after burning the corpse of one, the rains come and wash the toxin into the ground, to let the party really come alive....well undead!

Based On A True Story....They Claim

To fully understand what’s going on you have to know the history, but I will save that for Wikipedia. The short version is this: Night of the Living Dead is public domain due to the laws of the time and some snafu when changing it to film.

There were times I caught myself squirming from the visuals (Such as cutting the head off a squirming body), and I am not ashamed to admit that the first zombie you see beyond the headless one gave me the creeps at first! Then some other times I was laughing out loud.

Russo went a different route, with zombies that are literally re-animated corpses. They can hear, speak, move at the rate a normal human could, with the strength of a normal human; and in my opinion makes them far more deadly than Romero’s zombies. It also lends itself to more freedom and artistic things to do when it comes to deaths and plot twists.

Sadly none of the cast made it huge, they had some bit parts here and there and a few went on to be regulars for TV shows, it really makes me sad because they did a great job in this movie, far better than some of the actors that went on to become big thanks in part to Romero's films; but such is Hollywood, all about who you know.

With a solid and believable story, realistic reactions from people, some dark humor thrown in, a woman who goes through literally the entire movie naked (except the first ten minutes), lots of gore, and a realistic ending that I applauded for not being another ....well...watch it and find out for yourself, it truly is, in my opinion a great ending.

Vampires and Zombies › Zombie Movies › Return of the Living Dead