Land Of The Dead
One of Half a Dozen

Land of the Dead director George A. Romero is the undisputed ruler of zombie movies. Over 25 Titles under his belt with the majority being in the zombie franchise there is no doubt the man knows how to weave a story.

Having been created in 2005 and the fourth of Romero's 'dead' series of films they are in order:

Despite the b/w title, the movie is in color.

The zombies have gained the upper hand, taken over the majority of the globe. Humans have put themselves into pockets and groups in major metropolitan areas where safety can be given more easily.

Society has progressed and those with money are still in power. In fact our story finds the 'ivory tower' standing in the center of an island surrounded on three sides by water, making it virtually impenetrable to the zombie infestation. Life is hard, but manageable in these hubs as long as you remember your place.

That is until, the zombies start to learn. Having been left to their own devices for most of the unnatural life they lead, they seem to be trying to go back to what they did in life. In fact there is a small band of zombies, complete with tambourine! 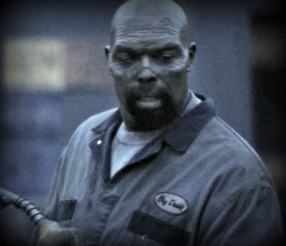 One Zombie in particular, "Big Daddy" (Played by Eugene Clark) A seeming mechanic in his former life, is the first one to get the spark, no longer amused by fireworks, and having figured out cause and effect, many doors are now open to them.

To make matters worse, Mr. Kaufman (Dennis Hopper) controls one of these islands where humanity is 'safe' until he double crosses Cholo (John Leguizamo) and Kaufman’s pride and joy of the zombie resistance "Dead Reckoning" is stolen.

Dead Reckoning is a beast of a armored and armed semi.

Also, did I mention that zombies also figured out how to use a gun? What could possibly go wrong with zombies wielding guns? 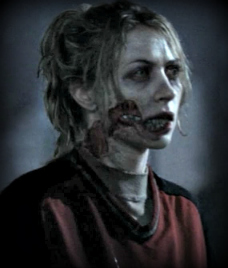 Being made further in the real future of course the effects are better than they were before with less hokey and pokier in the weapons, and even a few surprises.

I like that there are reoccurring zombies in this film, one that sticks out in particular besides big daddy is this hot little number here in the baseball outfit!

Some Surprises, Some Disappointments

Vampires and Zombies › Zombie Movies › The Dead, Land of