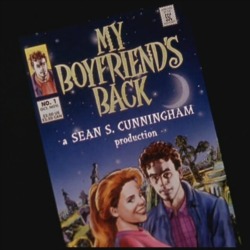 When I first saw the title of "My Boyfriends Back" on my review list I thought to myself "Oh god, shoot me now, this is going to be the worst movie I have seen in years." Thankfully this was not the case.

Funny enough the cast has two people you likely have never heard of before, or will again in the lead roles but people you surely have seen or heard of in tiny bit parts.

Allow me to explain, we star Andrew Lowery as Johnny and Traci Lind as Missy but when you get a bit later into the movie you will be floored when you see Matthew McConaughey (Lincoln Lawyer, We Are Marshall, U-571)  in one of his first roles as "Guy #2" in this movie. 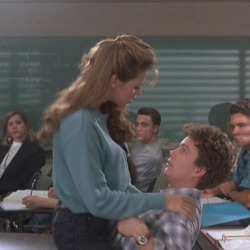 There are appearances as well from Austin Pendleton (A Beautiful Mind, Finding Nemo, Oz, and My Cousin Vinnie) and to see Edward Herrmann playing in a zombie flick after seeing him in The Lost Boys was a nice change.

The movie starts out in a comic book like style as Johnny narrates his love for missy. From the time he was in first grade he has adored this girl.

But, kids being kids, he has always been a bit of a wuss about telling her. Now in high school and having to sit next to her in class every day is tearing him up. To the point he has fantasies and falls asleep in class dreaming about her. 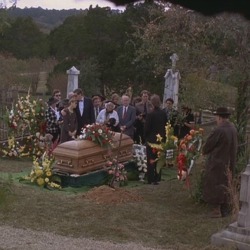 One day, he gets a half-cocked idea to get her to fall in love with him, and it completely backfires. Now, Johnny finds himself a newly born zombie, and Missy, who barely knew he existed a few days before now finds herself falling in love with a zombie.

With only a couple spurts of blood, no visible gore, and mostly clean language (Of course a few curse words) I would let my kid watch it once they are over the age of 13...Maybe younger if they REALLY liked zombies.

They also tend to not take even itself very seriously, with the resurrection of the recently dead Johnny as a zombie; the good doctor even quipping:

"Your dead, we rarely see this much activity with a dead person."

My personal favorite, when he is tardy to school:

"That is one Demerit, Just because you’re dead does not mean you can come waltzing in here whenever you like..." 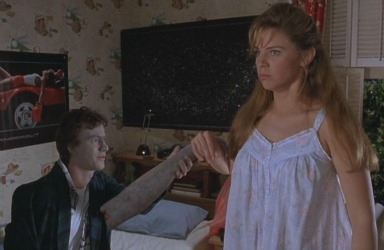 In fact, most of the town hardly bats an eyelash until they think he has eaten someone.

Not everyone is going to like the film though, but there is hardly a film out there that 'everyone' loves. I for example am not a huge Star Wars fan, but I understand it has a huge fan base.

There is nothing serious about this movie, not one single thing. Even the love story mocks itself the whole way through, BUT, most people that have seen Romantic Zombie Comedy movies understand this.

So, jump on in and give it a try, I promise you that you have seen far worse movies. Who knows, this might just be a gem in your collection. I know that it is in mine.

Vampires and Zombies › Zombie Movies › My Boyfriends Back